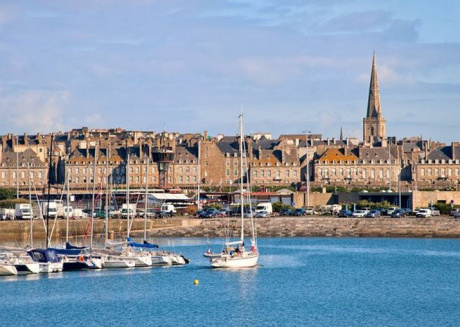 Brittany is one of the eighteen regions of France, named after the historic geographical region of Brittany, which makes up more than half in area. It is located in the west of France, with the English Channel to the north and the Bay of Biscay at the south, neighboring the Normandy and Pays de la Loire areas. The name of Brittany originates from settlers that came from Great Britain between the fifth and seventh centuries that were that were fleeing the Anglo-Saxon conquest of England. The countryside is dotted with attractive medieval villages and castles, with fishing villages in bays along the Atlantic coastline. The landscape varies from peaceful moors and pristine forests to secluded sandy beaches and dramatic seaside scenery. Brittany is also a land of myths and legends with a Celtic influence, ideal for visitors of any age.

Dinan is one of Brittany’s most well preserved medieval walled citadels and this charming town is definitely worth visiting! You can walk on its impressive ramparts or clamber up the St. Catherine Tower for a view of the beautiful valley beneath. Another amazing view can be found by going up the steps of the Clock Tower, known as Tour de l’Horloge in the Vieux Dinan. Lovely winding pedestrian streets and half-timbered houses characterize this old quarter and is a designated Ville d’Art et d’Histoire (Town of Art and History). The town supports local artists of all kinds, even culinary experts. A market showcases their talents on Thursday mornings at the town square of Place du-Guesclin, named after a knight from the fourteenth century.

Quimper is a picturesque historic town on the banks of the Odet River with lovely cobblestone streets, half-timbered houses, and quaint pedestrian footbridges decorated with potted flowers. In the center of the town, you will find the Place Saint-Corentin, named for the first bishop of Quimper. In this square is Quimper's Cathédrale Saint-Corentin, an impressive Gothic Cathedral that was built during the 13th and 15th centuries with the fabled figure of King Gradion between the cathedral's two towers and stained-glass windows from the 15th century. The Musée des Beaux-Arts is right across from the cathedral, displaying a fine arts collection. You should also stop by the Musée Départemental Breton, where you can admire the exhibition of archaeological objects, ceramics, artworks, and even folk costumes that divulge Brittany's rich cultural heritage. For a break from the history, you can visit the surrounding countryside of Cornouaille, which is one of the main attractions of Quimper. This stunning landscape is defined by its rugged rocky peninsulas and spectacular views of the sea.

With its picturesque half-timbered houses and canals, the rustic village of Josselin lies in the Morbihan area of Brittany. The must-see sight of Josselin is the Château de Josselin, built in the 11th century and inhabited through the centuries by generations of the Rohan family, named for the son of the Viscount who constructed the château. This majestic castle lies on the banks of the Oust River and overlooks the landscape with its turreted towers, surrounded by formal French gardens. You can go on a guided tour of Château de Josselin and admire the extravagant interior, and the library houses more than three thousand antique books. If you like gardens, you will love the perfectly trimmed tree-lined lawns and rose garden. For the lovers of the odd, the château also features a Doll Museum with dolls dating back to the 17th century.

Vist the town of Roscoff

Roscoff is a particularly delightful seaside town located on a peninsula that projects out into Morlaix Bay on the north coast of Brittany, and has netted it a place as one of the region’s ‘small towns of character.’ It has beaches and a pleasant harbor, and its town center has preserved its beautiful architectural heritage – there are lovely sixteenth- and seventeenth-century buildings from its past as a prosperous port. Just a short boat ride away offshore is the small island of Île de Batz. If you are looking for something removed from the urban hassle – this is it! Free of cars, it offers a serene getaway from the mainland, with tranquil beaches and the Jardin Exotique Georges Delaselle, a botanical garden founded between 1897 and 1937 by a Parisian business man.

Rennes as the old capital of Brittany is still the economic and cultural center of the region, as well as being a university town. The current Rennes is now a modern city known especially for its streets laid out at a design of right angles. When you visit, you can begin with a walking tour at the Place de la Mairie, where you can admire the Hôtel de Ville (or Town Hall) that was built in 1734. Towards the west of the Place de la Mairie you will find a lovely church, the Eglise Saint-Sauveur, built during the 17th and the 18th centuries. Surrounded by 18th-century houses at the east of the Town Hall is the Place du Parlement de Bretagne. Going northeast, you will find the Romanesque abbey church of Notre-Dame en Saint-Melaine with its intricately sculpted frontage. Just strolling through its narrow cobblestone lanes around the cathedral looking at the perfectly preserved historic houses –such as the Hôtel de Blossac– gives a timeless feel.

This beautiful region needs to be your next holiday destination for sure! With CuddlyNest, you can find that dream vacation rental. Whether you are on a romantic weekend getaway, on an adventure with friends or simply taking a breather by yourself, you can find the perfect rental with CuddlyNest according to your budget and taste. The search filter helps you narrow down your budget, location and amenities, and you can find just what you need from trusted hosts, such as cozy apartments, villas and more with all the privacy and facilities for a memorable holiday with CuddlyNest!