Temperatures in Port Aransas throughout the year 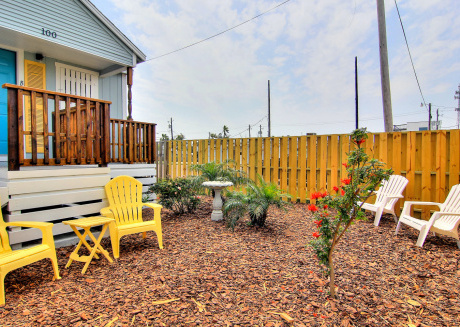 Upgraded efficiency right in the center of Port...
OTHER
2 guests
from $182

It is located in the Gulf of Mexico, near the Corpus Christi Ship Channel. A wide range of beachfront sights is available to visitors including parasailing, skydiving and aerial tour experiences on the waterways of the Coastal Bend. Sailing charters offer opportunities for fishing for yellowfin tuna and other native aquatic species, while nature cruise excursions demonstrate flora and fauna of nearby Aransas National Wildlife Refuge. Laidback dining and nightlife venues serve classic American cuisine with a Texas twist for relaxed dining after outdoor adventures at Mustang Island State Park, with over 5 miles of pristine beach, or Roberts Point Park, where community concerts take place during the summer.

Are you seeking a reliable vacation rental for spending a perfect trip with your family at Port Aransas? Cuddlynest has got you covered! By opting for its service, you can book an entire house, apartment, villa, condo or cabin of 2-12 beds at $84-$854. All the amenities and facilities will be at your expense, and you are going to feel at home during your stay at this beautiful and adventurous city. So, what are you waiting for? Sign up for this astounding service and make some cherish-worthy memories!

Chute 'Em Up Parasailing has been offering quality adventures off the Texas coast for the whole family for more than 15 years. The company's guided parasailing excursions depart from the Lydia Ann Channel and travel along the Gulf of Mexico with famous sights such as the Aransas Point Lighthouse, Turtle Cove and the USS Worthington shipwreck.

Coffee Waves is a regional Texas coffee shop franchise with three locations in Alameda, Corpus Christi, and Port Aransas. Gourmet coffee brews are made from brews that are among the best in the world and include hot, and frozen latte, mochas, cortados, macchiatos, and cappuccino coffee. The beach-themed café displays work by local artisans from the bay, which has become a popular meeting place for the community.

Mustang Island State Park is a 3,954-hectare park named after the wild mustangs who visited the island in the 19th century. The park boasts over 5 miles of unspoiled beach and offers a variety of outdoor recreational activities such as swimming, surfing, hiking, and mountain biking. Kayakers can explore the Mustang Island State Park Paddling Trail, which includes more than 20 miles of trails along the coast of Corpus Christi Bay and offers some of the state's best opportunities for shallow water fishing.

The museum offers tours of various nearby historic sites, including the small chapel on the dunes, built in the 1930s for the poet Laineate, Aline Carter, in Texas.

Granite jetties and a lighted harbor pier are popular fishing spots, and a 1-mile shot serves as a walking, jogging, and cycling route. Other park facilities include a lookout tower, an educational xeriscape garden, a playground and basketball, football and volleyball courts.

Skydiving excursions are available for beginners and experienced skydivers of 18 years and older, led by certified skydiving instructors. Skydiver safety is emphasized, with all spare parachutes inspected and re-certified by accredited technicians every six months. Packages are available for landings of beach parachutes and skydiving remotely above the nearby island of San Jose, with the price included ferry fare as part of all excursions. Professional photos and videos from excursions can be added to all skydiving packages for an additional fee. Private skydiving excursions can be booked for birthdays,

All cruises take place on board the Sunny Ray Manta Catamaran, which has traveled the waters of more than 16 countries and has recorded 18,000 nautical miles. Cruises are honored by US Coast Guard Captain Daniel Bond

The historic Warbird, which stopped military use in the 1980s, is one of around 600 that is still in use worldwide. All flights are led by fourth generation pilot and flight instructor Trey Hayden and depart from McCampbell-Porter Airport or Mustang Beach Airport. Half-hour flights show the city's Intracoastal Waterway, as well as many of the nearby Corpus Christi's attractions, such as the Texas State Aquarium, Whataburger Field and the USS Lexington.

The Brewery is the first brewpub of Port Aransas and offers internally brewed beer and standard American bar meals. The restaurant was completely renovated in 2015 to emphasize a unique Texas atmosphere in a classic sports bar environment with a range of full-fledged Grade-A beers on tap, with Texas hop and other locally produced ingredients. Menu highlights include hand-thrown brick pizzas, jumbo chicken wings, and blasts and mash. Ten high-definition, large-screen TVs throughout the restaurant offer viewing options for all major national and international sporting events. Catering and private location space is available for private special events, for groups of up to 10 or as large as 1,000.

The Marine Science Institute of the University of Texas is the oldest and most prestigious research facility on the Texas coast, established in 1892 to study the unique marine and fauna of the region. The permanent naval laboratory of the facility was established in 1946 and consisted of two buildings that are still part of the campus of the institute today. Nowadays, the Marine Science Education Center of UTMSI serves as the institute's public education museum and offers seven aquarium exhibitions that show the maritime life of the varied ecosystems along the Texas coast.

Novice and expert bird watchers can gain experience with cranes during shallow water rides. During the tour, food and drinks are served in a concession area that lasts between 45 and 90 minutes.