Some of the most popular places to visit around the globe are sacred attractions.  Found in both popular cities as well as off the beaten path locations, these holy sites attract millions of visitors a year. Valued for being places of worship, and for their beauty and uniqueness, one can’t help but admire these structures. Some of these sites were even considered when choosing the new wonders of the world. We are here to share 11 of those sites with you and some things you may not know about each. Get your maps and travel wish lists ready. 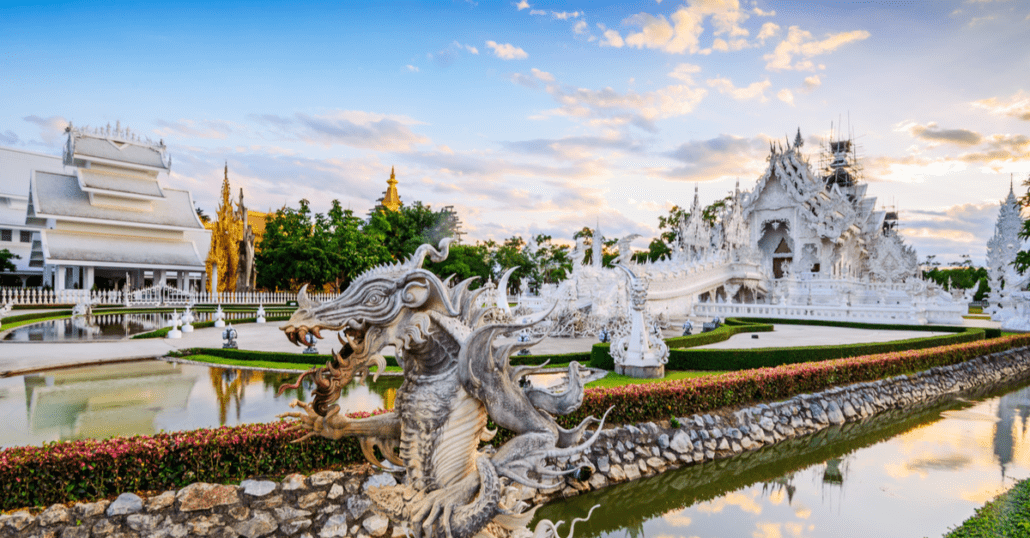 The White Temple, Wat Rong Khun is located in the Chiang Rai region in Thailand. At the end of the 20th century, the temple in this location was in complete ruins. Thai artist,  Chalermchai Kositpipat, decided to completely recreate and rebuild the temple. He funded the project completely on his own and began working on it in 1997. While it is not completed and may not be for another 50 years, it is open to the public to visit and explore. When it is completed it will have a total of nine buildings. It is filled with Buddhist relics that tell ancient stories of the religion. It has become very a important part of Buddhist present-day culture. The temple also serves as a monastery for monks. 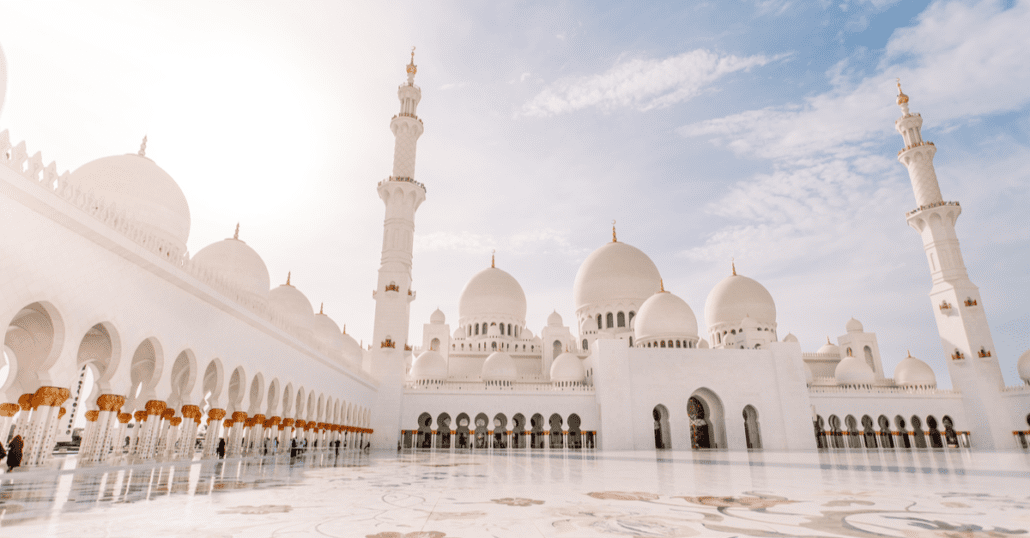 The largest Islamic mosque in the UAE is the Sheikh Zayed Grand. This stunning mosque, located in Abu Dhabi, is world-renowned for its ornate decoration and design. It was commissioned by the late president of the UAE, Sheikh Zayed bin Sultan Al Nahyan, and built from 1996 to 2007. He wanted a place where the Islamic culture could blend with the art and history of the modern world. The beautiful mosque can fit up to 40,000 people at one time. During Ramadan, the mosque welcomes millions of visitors. It is declared by many as one of the most important sacred attractions in the world. 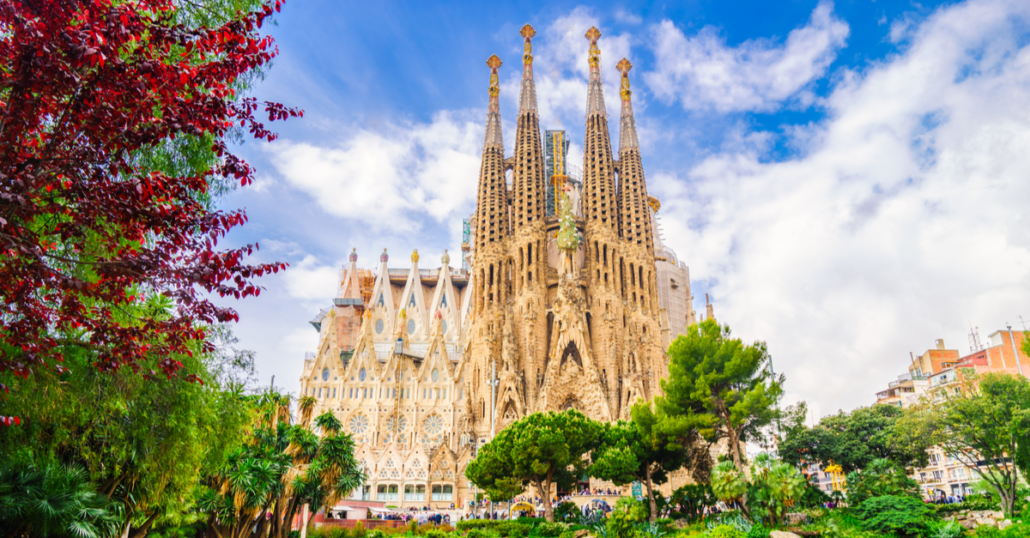 One of the most revered places in Spain is La Sagrada Familia located in Barcelona. Construction on the Roman Catholic Basilica began in 1882, and to this day it is still not completely finished. In 1883, Spanish architect Antoni Gaudi took over as chief of the project and combined a mix of Gothic and Art Noveau forms. When he died in 1926 the building was no more than 25% complete. It is the most visited tourist site in Barcelona, and one of the most visited sacred attractions in Spain, with over 3 million visitors a year. It remains one of the most cherished works of art and architecture in the world. 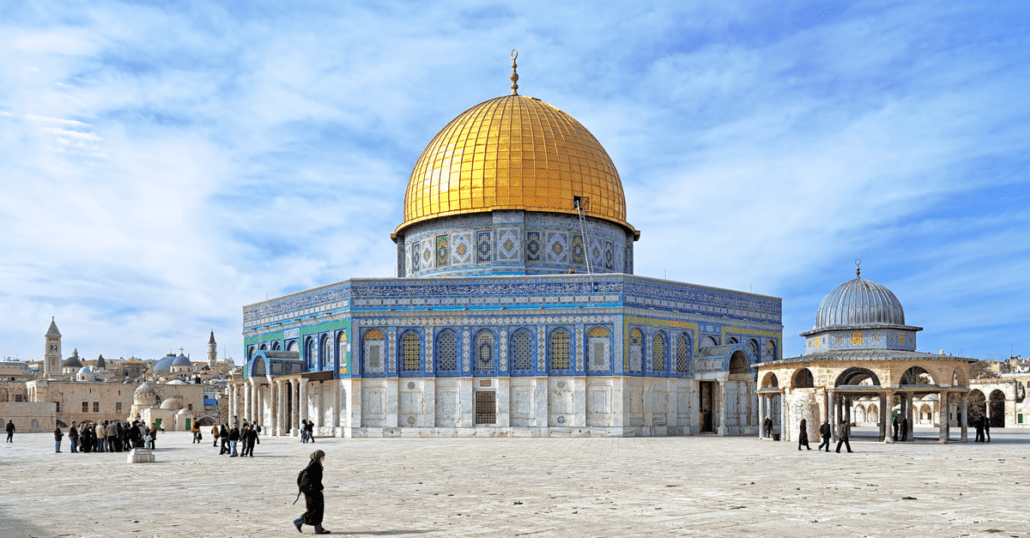 Located in the Old City of Jerusalem, Temple Mount is an integral structure and part of multiple world religions. It is a holy site for Judaism, Christianity, and Islam, and is one of the most visited sacred attractions in the city along with the Western Wall and Dome of the Rock. It is the holiest place in the world for the Jewish people, creating a lot of contention with the other faiths. Historically, the Jewish people are forbidden entry into Temple Mount due to Jewish law stating their people cannot enter Jewish holy grounds. Instead, to worship, they visit the Western Wall located at the bottom of the hill. Pro tip: spend a little extra time reading the updated policies before visiting. Those can be found, here. 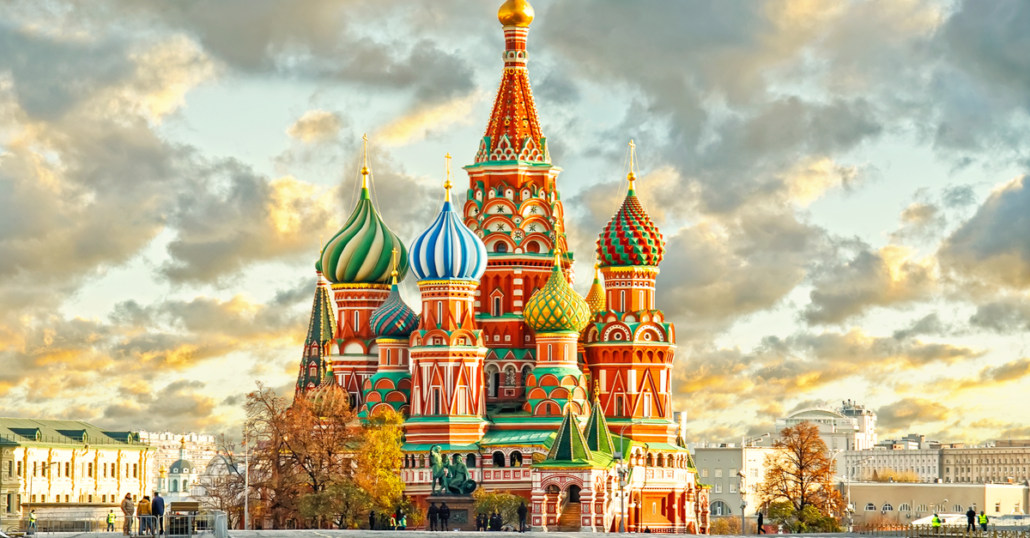 St. Basil’s Cathedral is one of Moscow’s most famous structures and pieces of artwork. Not only is it important to the people of Moscow, but to all of Russia. The cathedral is located in the center of Red Square and is viewed as a symbol of Russia’s past, present, and future. Ivan the Terrible ordered its building in 1555. He wanted to celebrate defeating the last of the Mongol empire in Europe. After it was built, he was determined that the architect never build a cathedral as magnificent as this. While it is still a religious symbol for the Russian Orthodox Church, the cathedral now belongs to federal Russia and serves as both a Christian Church and a museum.

The astounding Paro Taktsang Monastery clings to a cliff above Paro Valley, Bhutan. It is a cultural phenomenon and a very big part of the Buddhist Himalayan culture. While it appears impossible to access, visitors can arrive at the monastery by trekking paths along the mountain. This has created some difficulty in maintaining its structure over the years. It is also commonly named “Tigress lair” or “Tiger’s Nest” from the legend of Padmasambhava flying to the site on the back of a tiger. The temple offers one of the most beautiful views and one of the most unique experiences when visiting the Himalayas.

Located in Istanbul, Turkey, the Blue Mosque is an Islamic place of worship. It is originally named The Sultan Ahmet Mosque after the sultan who commissioned its construction in 1609. Although the mosque is not blue on the outside, its interior is adorned with 20,000 handmade Iznik ceramic tiles that create a blue color. Hence giving it its nickname. It was built to rival the Hagia Sophia which sits opposite the mosque no more than a four-minute walk away. Due to its similar design and structure, many tourists question if they are the same building. The builders made six minarets to match the most important mosque in Mecca. 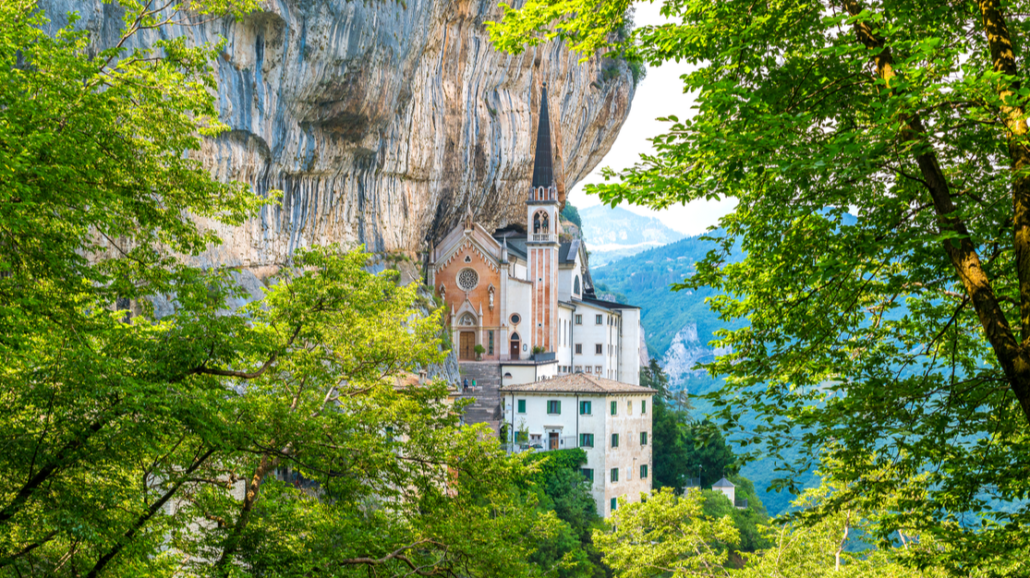 Santuario Madonna Della Corona is one of the most stunning religious sanctuaries in Italy. It is tucked into the cliffs of Mount Baldo in the province of Verano. Visitors come to la Madonna for silence, worship, and meditation. The sanctuary also symbolizes a place between heaven and earth. The church was built in 1530 and appears as if it is almost hanging off the cliff rather than sitting in a cave. The structure was heavily renovated in the 1970s proceeding a visit by Pope John Paul II. The actual chapel can only be reached by foot, representing the path Jesus took during the Passion of the Christ. 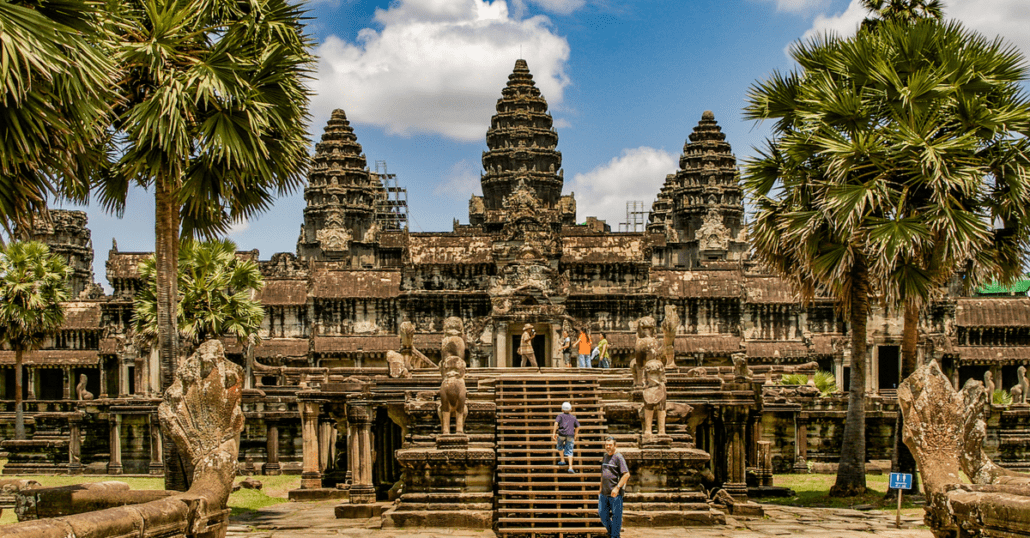 Named a UNESCO World Heritage site in 1992, Angkor Wat is the largest religious monument in the world. This Buddhist temple was originally constructed for the Hindu religion, during the first half of the 12th century. It is built across 400 acres and took over 40 years to construct. It served as the capital city for the Khmer empire until the second half of the 12th century when it was converted into a Buddhist temple. Its name directly translates to “city of temples.” It still remains an active place of worship for Buddhists, today. In 2019 it was recorded that over 2.6 million people visited the temple complex in 2018. 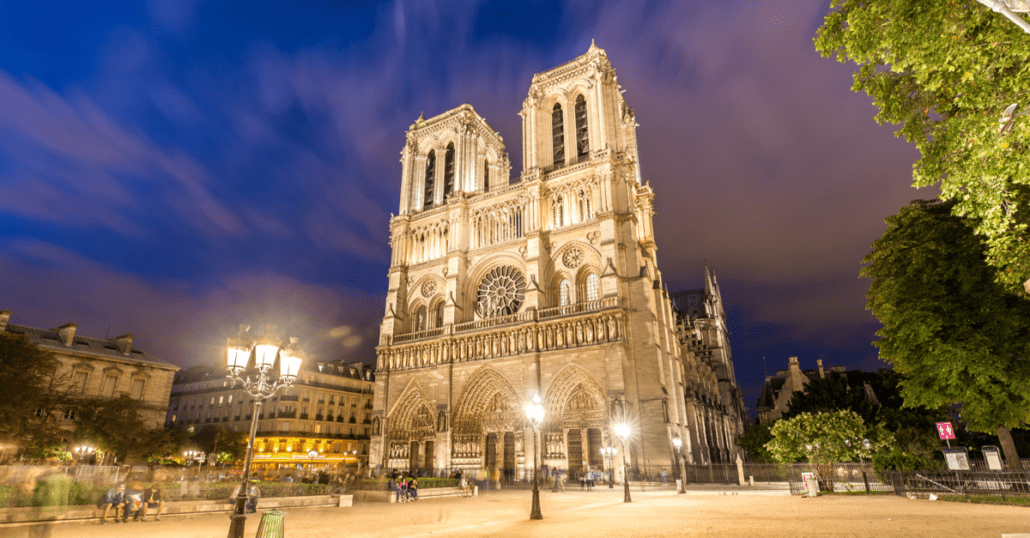 The Notre-Dame Cathedral is one of the world’s best examples of medieval gothic architecture. Notre-Dame translates to “Our Lady” and was dedicated to the Virgin Mary by the Parisians. Located on the Île de la Cité in Paris, construction on the Notre-Dame began in 1163 and was completed in 1345. It is also believed that the cathedral was built on top of ruins from the ancient pagan city, Lutetia. Tragically, the Notre-Dame caught on fire in April 2019 which destroyed one of the spires. Before the fire, the cathedral welcomed more than 35,000 visitors a day. Although the renovation is currently on hold due to the pandemic, France has ensured that the restoration of the cathedral is a priority and will begin as soon as possible. 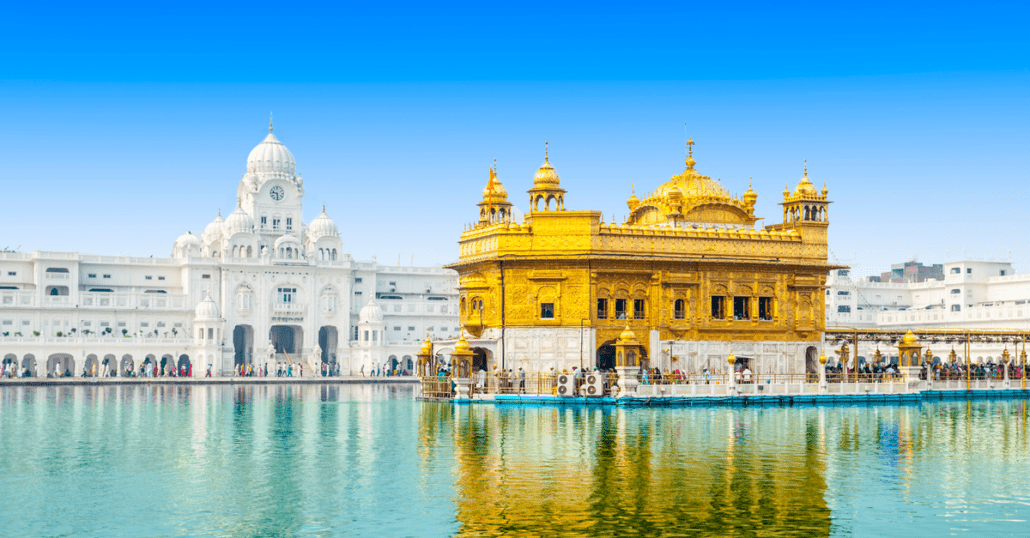 The Golden Temple in Punjab, India is formally known as Sri Harmandir Sahib Amritsar. It serves as both a place of worship for the Sikh religion, as well as a symbol of community and equality for all of India. It is also considered to be the national Sikh temple of India and a Gurdwara which means “door to the guru.” Construction on this remarkable structure began in 1581 and was not completed until 8 years later in 1589. In 2017, the World Book of Records declared and verified that The Golden Temple was one of the most visited places in the world.

Have you visited any of these sacred attractions? Let us know in the comments. Stay tuned for more must-visit global sites this month on the CuddlyNest blog and social media channels. 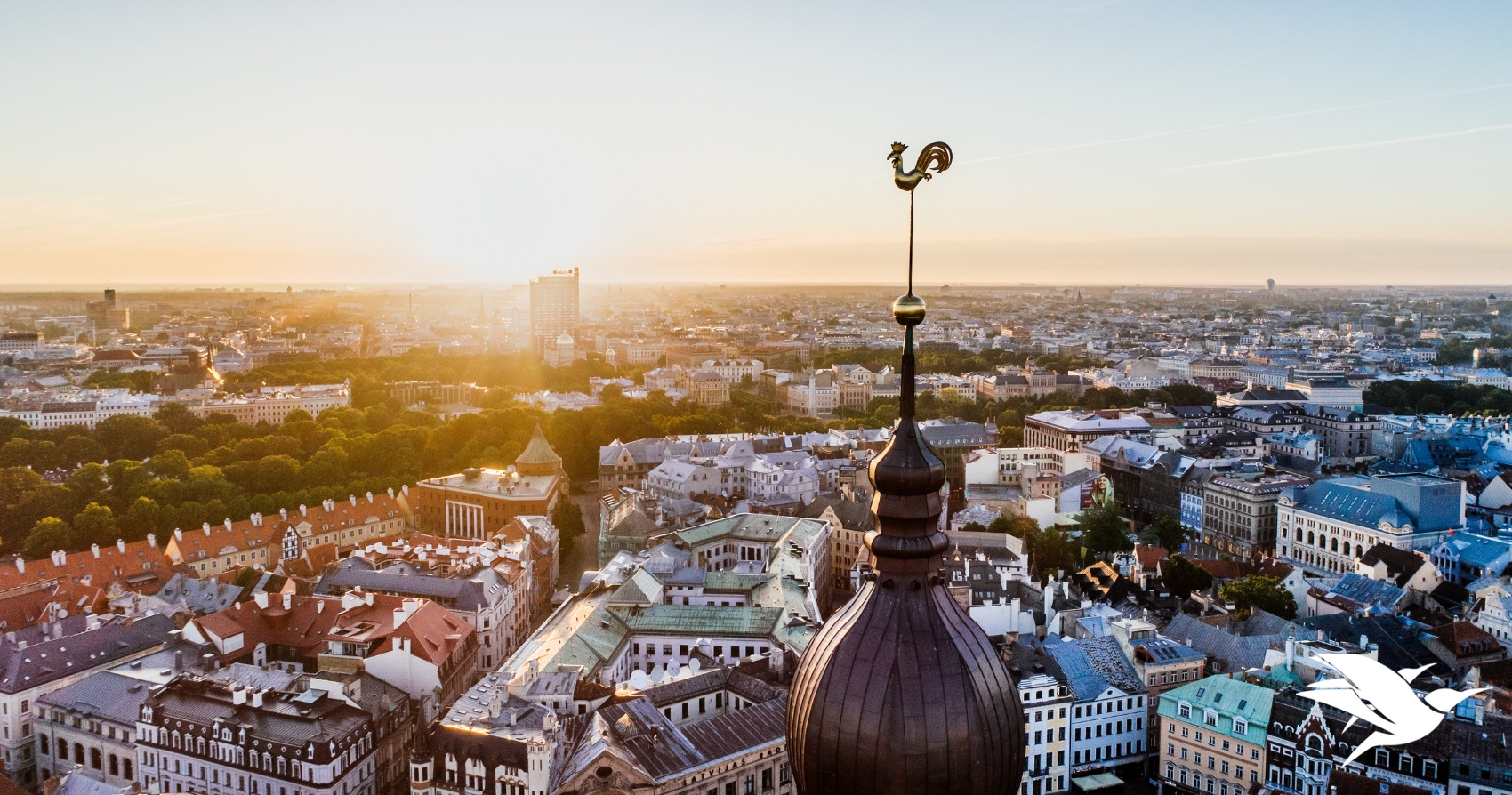 A Guide to The Art Nouveau Architecture In Riga

Being culturally aware during a trip is an eye-opening experience and, fortunately, Europe offers a... 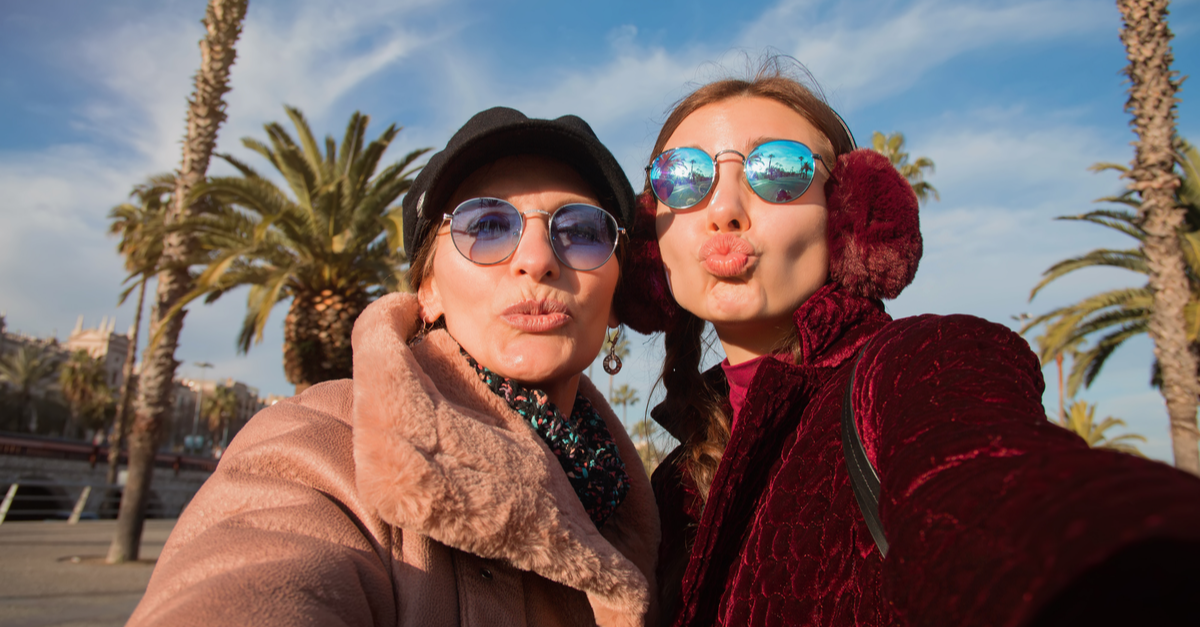 7 Reasons To Plan a Trip With Your Mother

One of the top benefits of traveling with family is, undoubtedly, the possibility of strengthening... 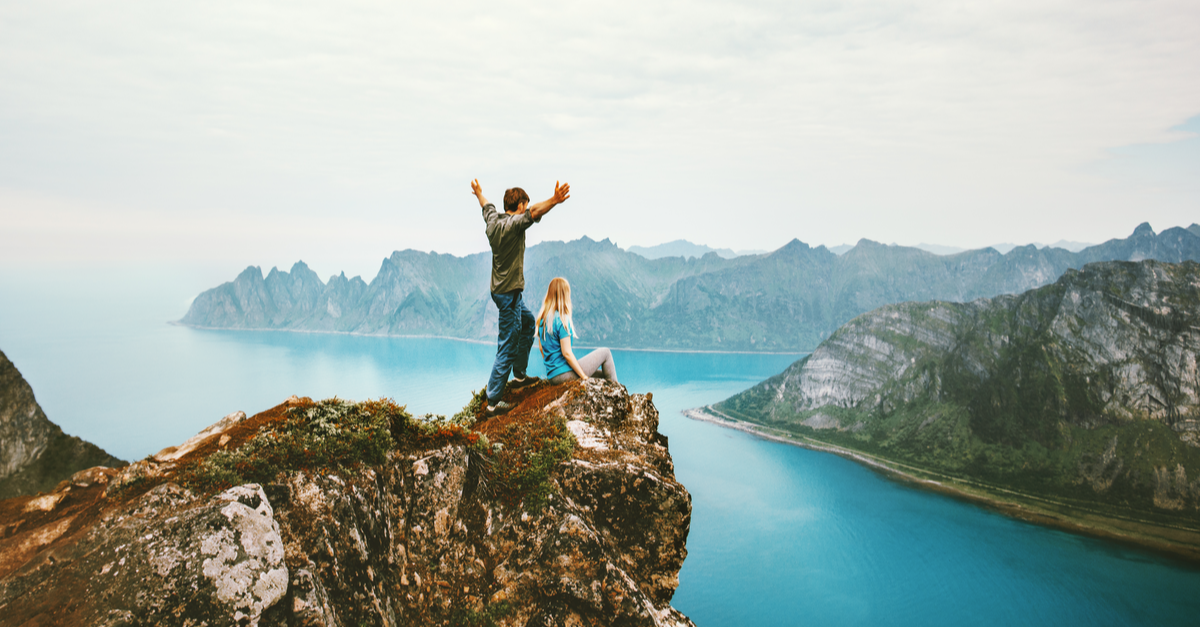 12 Ways to Internationally Travel from Home

As time goes by, the possibility of traveling again seems to be getting closer and...

A Guide to The Art Nouveau Architecture In Riga

Being culturally aware during a trip is an eye-opening experience and, fortunately, Europe offers a...

7 Reasons To Plan a Trip With Your Mother

One of the top benefits of traveling with family is, undoubtedly, the possibility of strengthening...

12 Ways to Internationally Travel from Home

As time goes by, the possibility of traveling again seems to be getting closer and...