The summertime not only brings warmer weather and beach days, but also festivals and celebrations held around the world. People gather far and wide within their own countries and internationally to enjoy several summer traditions that cannot be beaten. While this year’s celebrations may look a little different, there is always time to plan to attend these global events next year. From barbecues and bonfires to races and celebrating friendship, these are the 13 summer traditions and festivals you need to know about.

Learn more about these Summer Traditions:

The Chinese calendar is filled with celebrations throughout the year. One of the most exciting traditions held annually in China is the Dragon Boat Festival. This festival has been celebrated for over 2,000 years and was even added to the UNESCO World Intangible Cultural Heritage list in 2009. Also as of 2008, the Dragon Boat Festival is a public holiday in China. The festival commemorates the life and death of Qu Yuan, a famous Chinese scholar. A key part of the festival is the famous dragon boat races. These boats can be anywhere from 40 to 100 feet long and sit 80 rowers. The races symbolize bringing the dragons to life and laying them to rest after the race finishes. While the festival’s date changes yearly it is mainly held between the end of May to the end of June.

For over 50 years in the United States, Pride festivities celebrate the LGBTQ+ community and is one of the most popular summer traditions. The first-ever Pride took place in New York City on June 28, 1970, one year after the Stonewall uprising. Since then, cities throughout the North American country fill the street with rainbow colors, parades, floats, and music to spread love, compassion, and kindness throughout the community. The biggest Pride festival is still in NYC every year and attracts millions of people from all communities to spread love and awareness. Other notable cities with large Pride events include Denver, Colorado, San Francisco, California, and Washington D.C.

Who doesn’t love to celebrate the longest day of summer? Occurring between June 20 to June 22, the summer solstice marks the day when the sun is at its highest point creating the longest day of sunlight in the Northern Hemisphere. Countries in Scandanavia celebrate the holiday with large bonfires on the beach. In fact, the first largest bonfire record was a result of a summer solstice celebration in Norway in 2016. Many people travel far and wide to visit Stonehenge in Salisbury, England to admire World Heritage Site during the solstice. Celebrants can watch the solstice via a virtual tour on the Stonehenge website.

The United State’s Independence Day is the 4th of July. Americans spend the day enjoying barbecues, bonfires, and red, white, and blue colors decorating absolutely everything. This is of course to match the American flag. On July 4, 1776, all thirteen American colonies signed the Declaration of Independence which gave the US freedom from under British rule. Many 4th of July summer traditions include parades throughout the country, a day at the beach, and firework shows in every city. Pro tip! Many coastal cities and lake cities light their fireworks in the water so that spectators can watch them from the beach and shore. It is a spectacular day of celebration and joy.

Looking for tips on how to safely celebrate this year? Watch the fireworks from your home, take a virtual tour of a national monument, and host a small BBQ of close friends and family. You can keep the 4th of July and it’s summer traditions alive, right from home.

Otherwise known as Bastille Day the French National Holiday, La Fête Nationale is celebrated every 14th of July. It is very similar to the United State’s 4th of July in tradition and celebration. This holiday marks the turning point in the French Revolution on July 14, 1789, which united the French people after fighting against the monarchy. The streets of France fill with proud French citizens as fireworks illuminate the Eiffel Tower. One of the main parts of the summer event is the military procession that goes down the long Champs-Élysées.

If you are in Tokyo on the last Saturday in July, attend the annual Sumidagawa Fireworks Festival. Traditionally, fireworks a part of festivals for the dead to celebrate and commemorate the lives lost during the crisis during 1732. The festival then began in 1733, however it did not become an annual event until 1978. The firework festival brings the city to life under the shimmering colors. Summertime and fireworks go hand in hand.

Every year during the last lunar month of the Islamic calendar, Muslim people from all corners of the world make the Hajj pilgrimage to Mecca, Saudi Arabia. Mecca is considered to be the holiest place in the Islamic religion. The pilgrimage can last from five to six days and is a mandatory religious duty for all adult Islamic people to do at least once in their lifetime. Between Saudi Arabian residents and international visitors, about 2.5 million people made the Hajj in 2019.

Show your friends how much your care by celebrating the International Day of Friendship together on the 30th of July. This summer tradition offers friends the perfect opportunity to celebrate life, happiness, and kindness for their loved ones. Countries around the world celebrate this day on different dates, however, it typically falls sometime in July or the beginning of August. Although the concept of this day originates back to 1919, it officially became a holiday by the United Nations General Assembly in July 2011. Fun fact! Paraguay was the first country to officially celebrate the international day of friendship in 1958. The best way to honor the event is by booking a stay for you and your best pals on CuddlyNest. You can even make new summer traditions during your getaway.

This Hindu holiday celebrates the birth of the eighth avatar of Vishnu, Krishna Janmashtami. It is one of India’s biggest and oldest holidays, due to Hindu tradition and teachings. The summer tradition includes two parts in which the Indian people build swings in their homes and place idols of the gods inside them, to then bathe them in milk, honey, and jewelry. Young boys also form a human pyramid to break a pot from 20-30 feet high. It is common for devotees of the celebration to dress their absolute best during the holiday and observe a day-long fast. While this an important festival in the Hindu religion, it is also a very proud day for all of India.

Also known as Fringe for short, this annual summer festival in Scotland is one of its most popular events all year. It is the world’s largest art festival and can last as long as a little over three weeks. The whole event features more than 50,000 performances and shows in over 300 venues throughout the city of Edinburgh. They include circuses, cabarets, musicals, exhibitions, and more. Spend next summer soaking in all the art and culture Scotland has to offer at the Fringe Festival in August. Pro tip: If comedy is your thing, check out local bars and pubs for free stand-up comedy shows. You can enjoy the events without purchasing a ticket.

One of China’s largest and grandest events is the Yi Torch Festival in the Yunnan province. The date of the celebration is always in August, as it corresponds with the 24th to 27th of the sixth month in the lunar calendar. While the festival includes wrestling, contests, horse racing, and more, the main event is the lighting of the torch. Each family lights a torch and uses it to illuminate the corners of the room and fields. Tradition says that this drives away all bad luck and brings a successful harvest. Larger torches are also made for the city centers to ward off bad luck for the entire community. It is truly a summer tradition of fire and light.

Burning Man is a festival of art, self-expression, and creativity. Originating in 1986, it occurs every year in the Black Rock Desert in Nevada. Tens of thousands of people attend this summer festival in the desert to collaborate, create, and share beautiful experiences together. Not only does this summer tradition include music and art, but also the building of an entire city. The art that is built at the event can include anything from sculptures to towers. At the end of every Burning Man festival, a large wood effigy symbolizing “the man” is burnt to the ground, as well as the rest of the event grounds. If you have the opportunity to experience Burning Man once in your lifetime, you will never forget it.

On the last Wednesday of every August, over 20,000 people gather in Buñol, Spain to celebrate La Tomatina. Hundreds of tomatoes are thrown at each other in the street in the Valencian town purely for entertainment and fun. This food fight has been a tradition in the town since 1945. Over the course of its tradition, the fight has been banned off and on, but that has never stopped Spaniards from participating in the event that brings them so much joy.

Have you ever celebrated any of these summer traditions and festivals? Let us know which, so that we can help you plan a trip to experience even more events next summer. 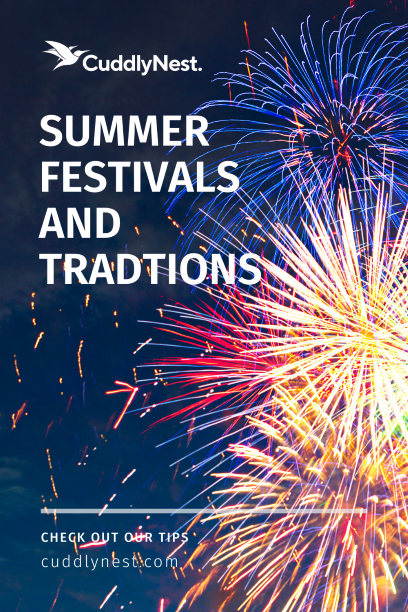 10 Ways to Internationally Travel from Home Why to (not) become a World traveler Fun Facts About Croatia: 30 Things You May Not Know 25 of the Most Instagrammable Places to Visit this Summer Staycations: 5 Benefits of Vacations near Home
Scroll to top