Spring has finally sprung, which means the arrival of the famous pink and white Japenese cherry blossoms. Known as sakura, in Japan, these delicate flowers are one of the most famous sights to see in Japan. But did you know you could also see them in other parts of the world, too? You may have even seen them and not known what they were. Don’t worry, we’ll break it down for you here. 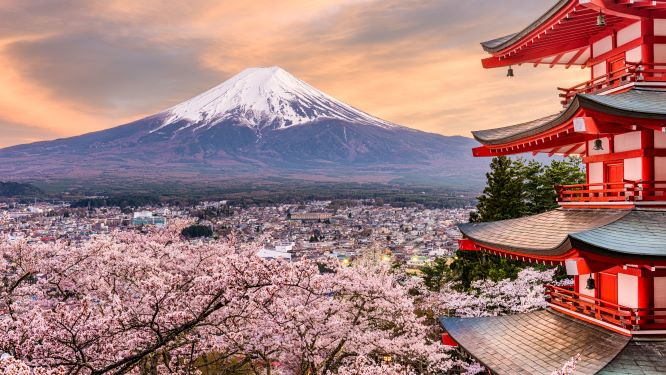 Here are some fun facts about this popular flower:

Do you have cherry blossoms in your home country? Check the list below:

If you want to visit the cherry blossoms in Vienna, you have to act fast. Due to the colder temperatures in this region, the cherry blossoms tend to make their arrival and departure rather quickly. Have no fear! You can still see them in between mid-March to mid-April throughout the city.

After WWII, as a sign of peace and friendship, the Cowra Tourism Board offered to make a Japanese garden in its province. The garden was first built in 1979 and refurbished in 1989. The town of Cowra celebrates a cherry blossom festival every September.

São Paulo is home to one of the largest Japanese communities outside of Japan. After the Japanese began immigrating to Brazil, they brought many seedlings of the cherry blossoms with them. The trees can be found in the Botanical Garden of Curitiba. They are usually in full bloom in July.

Admirers of the cherry blossom can find over 40,000 cherry trees in Vancouver, Canada. Brought in the 1930s as a gift from Japan, the arrival of cherry blossom season is celebrated every year with a festival in the springtime. 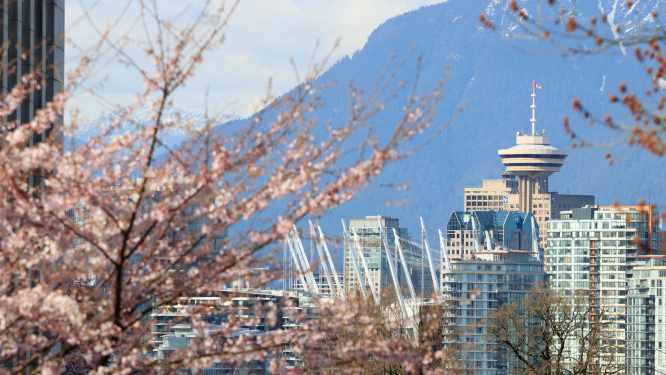 Take in the gorgeous views of the cherry trees in Vancouver, Canada.

Travelers come from far and wide to see the gorgeous cherry blossoms in Copenhagen. The most common place to find them in the capital city? Bispebjerg Cemetery and Langelinie Park in April.

Flock to Parc de Sceaux, in Paris, to see the orchards of cherry trees, both in white and pink. Visitors can find them bloom in early April.

Hamburg, Germany, hosts a full festival annually to welcome the return of the cherry blossoms, drawing in tens of thousands of spectators every spring. Every May a “Cherry Blossom Queen” is selected by the Japan Cherry Blossom Association. In German, the festival is known as “Kirschblütenfest.”

Cherry Blossoms in the Himalayas.

In India, the cherry blossom is found mainly in the Himalayan states. The country holds an annual cherry blossom festival in the fall, between October and November. With their arrival, the blossoms can be seen covering the Himalayan foothills, a truly breathtaking scene.

In Korea, cherry blossoms symbolize purity and beauty. In earlier tradition, monks used the wood from the cherry trees to make bows and roadblocks. The best place to enjoy cherry blossom season is in Seoul in late March, early April.

The town of Pyin OO Lwin is known as “The Land of Cherries.” While some of the cherry trees had to be genetically modified to survive the

tropical weather, they are still very important in Myanmar.

The cherry blossom trees in the Netherlands were donated 20 years ago by the Japan Women’s Club. In total there are 400 trees. 200 of the trees have female Japanese names and 200 of them have female Dutch names.

Most commonly found in the Christchurch Botanical Gardens, the trees are also found in Hagley Park in the heart of the city. Visitors can enjoy the open space under a blanket of cherry trees.

Spend the night in a hobbit house surrounded by cherry blossoms.

Every March marks the arrival of the cherry blossoms in the Jerte Valley in Extremadura, Spain. The valley holds over two million cherry blossom trees and fills it with the beautiful pink and white colors.

April 28th is the official Day of the Cherry Blossom in Stockholm, although these flowers tend to make an earlier appearance in the spring. The Swedes and Japanese hold a festival during this time each year, which marks 150 years of friendship between Sweden and Japan.

The cherry blossom festivities in Taiwan attract 50,000 visitors each year. The season typically starts as early as January and finishes in April. One of the most popular places to see the incredibly displace is at Tianyuan Temple.

Unlike many other areas, the typical season for cherry blossoms in Thailand is in the winter. The trees bloom mostly in Northern Thailand in cities including Chiang Mai. 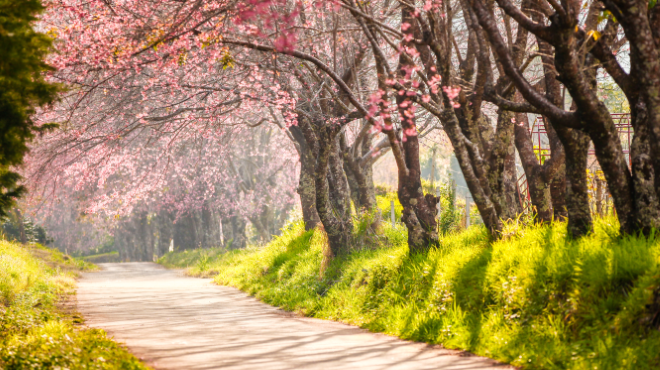 Stroll down the streets of Chiang Mai under a blanket of cherry blossoms.

Typically due to arrive in spring, the cherry trees made an early arrival this year, blooming in early winter 2019. For one of Turkey’s orchard owners, the early arrival came as a big surprise. After 30 years of cultivating the land, he had never witnessed an early arrival.

Travelers can find pink flowers all throughout the UK. The Gloucestershire region holds the national collections of Japanese villa cherries. London is also home to several parks and Japanese gardens where tourists can marvel at the cherry trees.

From coast to coast, travelers can see the beautiful cherry blossoms in many states of the US. Most notably in the East Coast including Boston, Washington D.C., and Baltimore, visitors come to the University of Washington, Seattle Campus, every March to take pictures in the gorgeous liberal arts quad filled with cherry trees. To see the current bloom in Washington D.C., you can watch from the Bloom Cam.

Add a visit to the cherry blossoms in your home country to your bucket list.

Now is the Perfect Time to Take an Online Course

Workouts You Can Do Anytime, Anywhere
Scroll to top